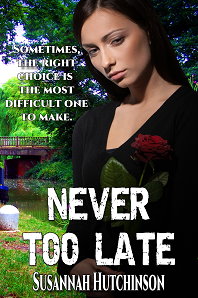 Sometimes, the right choice is the most difficult one to make.

Tina Blythe has led a difficult life, working hard to make something of herself. From the moment she met her future husband, she knew her happiness was assured. Clive was the answer to her prayers, a dream she thought came true.

It doesn’t take long for Clive to show his true colours, and her life takes an unexpected turn. Her husband has turned into someone she barely recognises, a mere shell of the man she married. Yearning for a fresh start, Tina is willing to do anything to give meaning to the life she lives. She refuses to allow herself to become a victim once again.

Determined to find a means to an end, she devises a plan that will help her gain her freedom. She knows it will be difficult, but somehow, someway, Tina is resolute. She will get past Clive’s harsh hold by any means necessary. Only then will she be able to lead the life she’s always wanted.

Tina squeezed herself between several parked cars and stepped onto the pavement, jogging the last hundred yards to her home. Hot and out of breath, she blotted her forehead with the edge of her sleeve. The thought of what waited for her behind the front door made her heart race. Her hands trembled as she reached into her pocket for her keys. They slid through her fingers and hit the ground with a loud chink.

Damn it! she thought, and bent down to pick them up.

She rolled her shoulders to ease the tension and slid the key into the lock, promptly letting herself in. Her mouth grew dry as she set one foot on the doormat. There he was, sitting at the bottom of the stairs, a position he assumed when things didn’t go his way.

“You’re late. Where have you been?” Clive asked, his hands locked together, elbows balanced on his knees.

Tina’s face paled as she stared at him. “I’m only a little late. You know I’ve been to see Sam.”

She kicked off her trainers and then remembered to place them neatly with the other shoes in the rack.

Clive’s eyes narrowed as he stared back at her. “You should have left earlier.”

“I got carried away chatting.”

She hung her coat on the hook and leant forward to peck her husband on the lips then stroked his right cheek, hoping that it would ease the hostility between them.

He brushed her hands away and said, “We said eleven o’clock. You will not see her again. Do you hear me?”

“It’s only a few minutes. Why do we have to go through this every time I see her?” she asked. “You know she’s my oldest friend.”

Clive’s lips thinned to a tight line. Her body tensed as the words left her mouth. He stood and approached her, clutching her shoulders and pinning her against the wall.

Tina’s cheeks tingled as Clive’s breath puffed across her face as he spoke She cowered before him, dreading what was to come.

Clive increased the pressure upon her shoulders, his eyes boring deep into hers. “I’m not making myself clear, am I?”

The scent of sour milk and garlic invaded her nostrils as his breath blew across her cheek. Tina’s spine pressed against the wall as she tried to back away from him to no avail. Clive wrapped his hand around her throat, pushing her jawbone upwards. His grip tightened, restricting her airflow. She slumped against the wall, feeling a little woozy. Spittle oozed from the corners of her lips, dripping onto his shirtsleeve. Incoherent nonsense came from her lips when she tried to speak.

A searing pain invaded her abdomen, causing her to double over. Through watery eyes, she watched as Clive shook his hand and flexed his fingers. The smug look on his face betrayed his enjoyment. A stream of urine slowly trickled down her thighs. Tina clamped her legs together, hoping to shield the wetness that was now seeping into her trousers from her husband’s view.

Her eyesight swam and she soon rolled to the floor. Curled up in the corner, Tina wrapped her arms around her middle. Her nostrils flared as she struggled to breathe, hoping that it would cure the dizziness she now felt.

Clive stared down at her and said, “You will not talk back to me again, bitch. Stop snivelling! I hardly touched you.”

Cowering against the wall, Tina tried to suppress her tears. She knew if she cried that it would fuel his anger.

Using the telephone table for balance, she stood on unsteady feet. Clive shook his head in disapproval.

“You’ve pissed yourself. Sort it out. It stinks.” He offered her a hand. “Come on. I’ll make you a tea.”

Tina allowed him to lead her through to the kitchen. He helped her into a chair near the table, and set about in preparing a cup of tea. Her knuckles whitened to the point of hurting as she clenched her fists across her lap. He flipped the switch on the kettle. Neither of them spoke until he placed the cup in front of her.

“Thanks,” she said, her voice barely a whisper.

Her throat felt dry as her gaze landed on the cup. She reached for it, the heat of the porcelain mug warming her palms.

She nodded, afraid of looking up at him. “Yes, Darling. I’ll drink this and have a shower.”