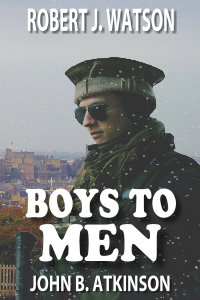 (Purchase Links: Will be posted soon.)

Sometimes, the right course of action is one we never expect to take.

The city of Lancaster is now a city gripped in fear. A group of extreme activists is holding the city at ransom, intent on making their demands clear. Their wish is to end the monarchy and return all the wealth obtained by them to the people of the country.

The Britain Without Monarchy group wants nothing more than to achieve an end to their own means. A tactical nuclear shell lies at their disposal, one of the biggest threats the country has ever seen. If their demands can’t be met, they’re quite willing to take the city down with them no matter the cost.

More lives are soon lost as the extremists try to find a stable ground. Forced to confront the situation at hand, the government has no other option but to retaliate before things get further out of hand. The city’s salvation lies in the hands of a group of cadets from the local grammar school. Though young, the cadets are determined in showing the country what they’re worth.

Teaming up with the Special Forces, the cadets soon embark on a journey that will test their mettle and open their eyes to the harsh world that now surrounds them. Their goal is to bring down the extremists without any further blood shed along the way. With orders from the highest level of government at their disposal, the cadets will do everything they can to ensure the city is liberated, once and for all.

On the 12th of September, 2005, Assistant Commissioner John Beaumont, from the Anti-Terrorist Unit based in London, England, opened yet another e-mail from his counterpart in the CIA. Most countries these days had a good open communication line to their counterparts. The 9-11 atrocities and other terror bombings across the globe had seen to that.

He found the usual greeting and several personal messages waiting for him. A serious message soon followed. The warning was an advisory and classified as a green alert informing all heads of security about an organisation that had just appeared on the radar. There was nothing new about the warning. Many countries were alerted several times a day about new kids on the block.

This warning, however, was specific to the British people. A new group had made several threats to overthrow the government, and in particular, to have the monarchy disbanded in the United Kingdom. This was nothing new to John. It seemed that everyone nowadays wanted to do away with the royal family and overthrow governments.

Some of the African countries and the Middle-East were prime examples. China and Russia had made several attempts to throw their governing bodies out. The retaliation from these two super powers had been swift. China halted the attempt and stamped out the push for democracy. Russia had failed and the Berlin wall came down. Other countries soon followed suit.

John read about these updates of new parties moving up the pecking order on a daily basis. Russian Mafia groups broke away on a regular basis to grasp the riches offered to them. Trafficking and drugs was, and still is, a good way to earn money. All it took was the fear factor and a high degree of ruthlessness. The government would then classify them as political troublemakers. Often, these special groups of people would slip below the radar or they would be taken out of the game by a bigger, stronger group. The government would often help them to disappear, but that depended on how much money they could spend on bribes to the corrupt ministers and other officials.

This particular update would be filed in the green file. This meant it had been noted but was not considered a threat severe enough to be acted upon. If needed, it would be flagged and checked.

By 2007, the Britain Without Monarchy group would be flagged several times. The radicalisation of the group saw them move to the yellow file. Its new leader, Kenny Byrne, had demanded the end of the monarchy. Kenny had risen in the political circles of independent counsels to sit on the Lancashire County council. He resigned from that post after his views on the monarchy were exposed in a Sunday national newspaper. The headline banner called him a sexual predator councillor who demanded the monarchy be scrapped.

John had checked the newspapers. Most of what had been said was a lie, but it did the task of getting Kenny to resign from his post. Several women had come forward to make complaints against him. The newspaper concerned claims to have secretly taped him demanding the fall of the monarchy. He even stated on a hidden camera that he would take steps to remove the family if they would not go willingly.

During that time, the monarchy was riding high on a new wave of popularity. Kenny’s position as leader of a council became untenable. He was a bright young star in the political world. He’d been voted onto the council as one of the youngest councillor’s in the Lancashire area.

The main political parties began to distance themselves from his views. After his resignation, Kenny enlisted several people who had similar views to his own. The groups funding was put under scrutiny by MI5. The newspapers began to run several damning stories on the group, and Kenny was the focus of media attention. Although it wasn’t proven beyond any reasonable doubt, rumours that the group had moved into the dirty end of political funding abounded. Bribes to ensure deals went through planning without hitches were the first to be brought out by the press. As the Britain Without Monarchy group grew in support more serious allegations were made against them.

Kenny seemed to spend more and more time standing on the high court steps protesting the innocence of the group than he did working for the group. These appearances allowed him to spread the word about his views, and inevitably, his support grew. It became a vicious circle. The final straw for him came when the allegations of human-trafficking and drugs were made. Many people called for the group to be outlawed. As far as the intelligence services and police were concerned, this meant something nasty was now on the horizon from a group who needed money.

John raised the lever from green to watch the yellow flag slide alongside the group’s name. This meant the group would be looked into, although the group hadn’t crossed the blue line yet. The blue line is a system of monitoring groups. Points were given for certain deeds or intentions instead of the service sending operatives out to watch every group that was flagged. The points system had been brought into being two years ago. Drugs and human-trafficking gave twelve out of fourteen points. The group was now given a shadow. The shadow would watch and learn as much as possible about the group as he or she could, and reports would then be sent in every two weeks to HQ. This action was sent out to all of the security agencies across the friendly globe.